Happy Holidays to all!

2020 has been a tough year for all of us. We all want you to know that we  appreciate you coming in and seeing each one of us and allowing us to serve you during this difficult time. 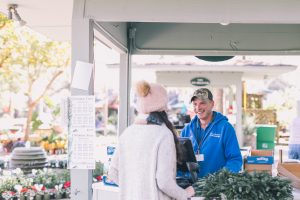 It’s nice to know that when the going gets tough for everyone, we can come together as a community and still have the opportunity to serve one another and get through situations such as the   Covid-19 pandemic. That’s the one thing that stands out about Tallahassee – the sense of community.

For those of you who might be wondering who I am, I’m Dwayne. If you’ve been to Tallahassee Nurseries over the past years, we’ve probably met at one time or another while I check you out with your plants and send you on your way to beautify your homes and community, making friends along the way. Through the years I’ve worked here at the nursery, I’ve learned the importance of giving back and helping others. It’s because of this lesson that I have a story I’d love to share with you.

The pandemic has been very hard on all of us. Admittedly, there are times I just felt like giving up  and pretending that the world didn’t exist anymore. What keeps me going is the opportunity to go to work each day and being able to watch the Joy on someone’s face when they find the right plant for their home or find the perfect gift for someone special. It has become a part of me. The community and the people have become a part of me; and somehow that makes it all worthwhile for me. So like many of you, as you drudge forward, remember to remind yourself that things won’t always be this way. People can thrive out of situations such as this. Because when we are at our lowest, that’s when the community becomes its strongest.

As the holidays approach  after a tough year, if you’re anything like me, you’re in need of a feel good story. I’ve got one that I would love to share with all of you. A story of love. A story of Hope. A story of Triumph.

For those of you who haven’t had the opportunity to know me more on a personal level, one of the things that I love to do as a hobby is to collect and repair vintage photographs, Victrolas, record players, etc.

About a year ago, I was in the market for a victrola when I found one for sale locally in the Killearn Estates area. I called about it and ended up purchasing it from a man by the name of Sam Kovacs. He was a nice gentleman and he told me that he hated to sell it but needed to downsize because he was getting married again (which I thought was very sweet for a man who was almost 80 at the time). What struck me so much about this machine was that it was in such great condition – almost like it hadn’t been played very often. He then told me that it had been in his family for 70 years, and he had never heard it play because he and his family never had a 78 RPM record.

Well needless to say, I gladly purchased it, and on the way home I couldn’t get over the fact that he had never had the opportunity to hear this thing play. After getting it home, setting it up and putting the first 78 RPM record on it., as I was enjoying it I felt a sense of loss knowing that Sam had never had the opportunity to hear it for himself. Over the next few weeks, I would come to get a very big history lesson on just how important this victrola would turn out to be. 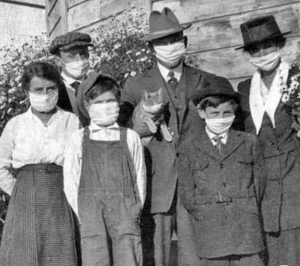 You see, Sam Kovacs, who now lives in Tallahassee, was originally from Hungary. His family escaped shelling combat during the Siege of Budapest at the tail end of World War II and fled to Austria where they befriended people by the last name of Haas. These people would forever change his and his family’s lives. It was the tail end of the 1940s and the Kovacs family had hoped to eventually get to the United States. It was this family who they ran into in Austria who had a family member (also Hungarian) who lived in San Diego,California by the name of Paula Haas. It was Paula who agreed to sponsor the Kovacs family to come to the United States to stay with her to help them get a new start and escape the destruction of Budapest.

The Kovacs arrived in the United States around 1950 and Aunt Paula, as they came to call her, took them into her home. she gave them the chance they needed in order to better their lives and become successful in a new country that they didn’t know. Within a few years, Sam’s father became the successful owner of an upholstery business which he ran until he died many years later. In fact Sam’s brother ran the family business after that until 2010 when he retired. But one of the things that the Kovacs inherited from Aunt Paula, upon her passing a few years after their arrival, was a victrola. A 1922 Victor IX (Victor 9) to be exact. She hadn’t played it for many years before the Kovacs arrived in the United States, as I would come to understand. It would be this victrola that I would come to purchase many years later. The significance in all of it was the fact that Sam took that victrola wherever he moved, always carefully packing it and displaying it in his home wherever that may have been over the years, through his Air Force years and throughout the United States. All the while understanding its significance, but never hearing it play. 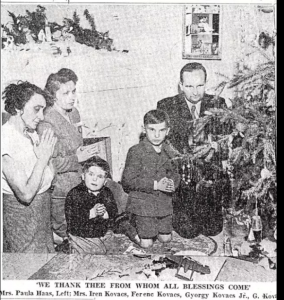 Sam’s now new wife, Melanie Rucker, spoke with Sam and she told me this whole story herself. I have to admit, the whole story choked me up a bit. It became important for me to do whatever was going to be necessary to make sure Sam was given the opportunity to hear his Aunt Paula’s victrola play, even if it didn’t sit in his living room anymore.

But Then The Reality Hit Me

Aunt Paula and her victrola symbolize so much more. It symbolizes the kind of person that each one of us strives to be. Good-natured people who help others. People who believe in the plight of mankind. People who know that tomorrow brings a better day.

You know, Aunt Paula was the original owner of this victrola and when she bought it new in 1922 from Thearle Music Company in San Diego, California guess what? She was living through the end of a pandemic. More than that, many people of the community back then were in masks also, as we are now. It’ll all get better. I know it will. 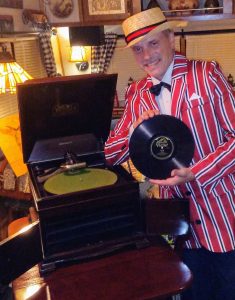 And so, as I wrap up this note, I wanted to share that the victrola was fully restored. It will be displayed and will be playing beautiful music at Tallahassee Nurseries in our Cottage Gift Shop through the month of December. My hope is that when people hear the music after reading this story, that they understand the significance of who Aunt Paula was and the powerful significance in it for all of us.

The victrola will arrive in the gift shop on December 5th. Sam and his wife, Melanie, have been invited to hear it play for the very first time at 6pm that evening.

This article was written by Dwayne Wolfe, Tallahassee Nurseries employee.