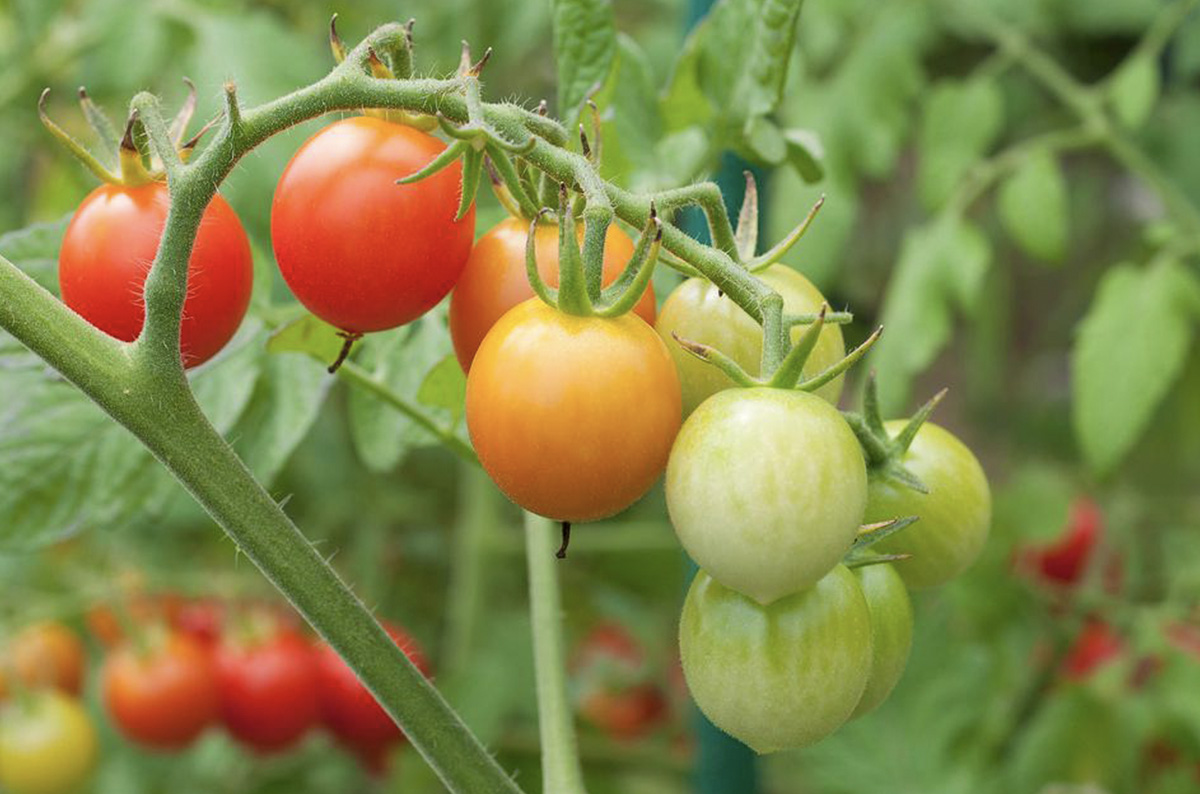 Growing tomatoes in Tallahassee is one of the staple spring crops we’re able to cultivate! There are dozens of varieties to choose from making things not only a tasty adventure but, also super interesting. Before you jump into growing some for yourself, and maybe even some friends, it’s important to know the difference in between a indeterminate tomato plant and a determinate tomato plant!

So what’s the difference between indeterminate and determinate tomatoes?

Determinate tomatoes are typically smaller, bushier plants that grow to their mature height and begin to set all of their fruit at once. After that initial flush of fruit, secondary rounds are possible in but generally are much smaller in number.

Determinate varieties commonly only grow to 3-5′ tall. New varieties can be even smaller at 1-3′ tall. Staking or caging determinate tomatoes, despite their compact size may still recommended in order to support its heavy load as all their fruit begin to set and ripen. Also, because they naturally grow to a small bushier height, pruning stalks or branches can lead to fewer tomatoes at the end.

Why grow determinate tomatoes?
Its a quick way to ensure that you get lots of tomatoes before the end of the season. This can be particularly important if you’re trying tomatoes in our shortened fall season. They’re a good choice if you like to can or make sauces because you get all your tomatoes at once. Many of the Roma or paste tomatoes are often determinate varieties. Determinates are also a good choice for smaller gardens or growing in a container due to their naturally compact bushy habit.

With their continuous growth, these plants should always have a trellis or cage to climb on and support both the vine and its fruit. These vines can reach anywhere from 4-8′ and higher. In addition to staking, pruning can be an advantageous technique for indeterminate tomatoes. Keeping the vine at between 1-3 main stalks and pruning out suckers that form along the main stalk, will help focus the plants energy into fruiting instead of more leafy green growth. This technique is highly recommended to increase yields and tomato quality.

Why grow indeterminate tomatoes?
There are far more indeterminate varieties than determinate to choose from and this includes most of the heirloom selections and cherries. Indeterminates are a great choice for enjoying fresh off the vine in smaller amounts with the ability to continue harvesting throughout the season. Many of the most well known varieties like Cherokee Purple, Better Boy, Brandywine, and Sweet 100 are all indeterminates. There also a few dwarf selection on indeterminates. These act just like the larger version just on a smaller scale and are easier to grow in a container.

Is one better than the other?
Both types can produce delicious tasting tomatoes that are a pleasure to grow and eat. Both have heirloom and hybrid varieties to choose from. It’ll just depend on the needs of the gardener and the garden to determine the best choice. There’s also no rule against growing both

so give them a try if you haven’t already!

We look forward to seeing you!